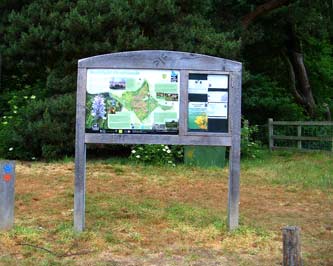 The Heathlands (also known locally as Hothfield Common) was probably, like many other similar areas throughout Britain, an ancient Neolithic and Bronze Age grazing ground and then, following the Roman invasion when the Manorial system was imposed, it became the private property of the Lord of the Manor. It is probable then, that for the last 1000 years, Hothfield, like most other common land was used as un-enclosed pasture for stock grazing and also important to local economy, it would have provided wood, turf and peat for fuel, heather faggots for road foundations, bog moss for wound dressings and bracken for stock bedding. Within living memory, farmers used horse-drawn machinery to cut bracken for use as a covering for clamps of root crops, and it was also supplied to the London Mews for stable bedding. Another important feature of common maintenance was the winter burning of bracken litter in October and November, a practice which continued until the Second World War.

Hothfield Heathlands covers an area of about 200 acres (81 hectares) and lies on a narrow band of sandy rocks known as the Lower Greensand on the gently sloping North-Eastern edge of the Weald of Kent. The two sub divisions of the Lower Greensand formation that occur at Hothfield are the Folkestone beds which are porous and the Sandgate beds which are fairly impervious. This has given rise to a spring line at the junction between the two beds, so forming small peat bogs in the shallow valleys, and it is the acid nature of these bogs and the surrounding heath land that provides a habitat for all sorts of rare and unusual plant and animal species. The scientific importance of the Heathlands was recognised in January 1951 when it was declared a Site of Special Scientific Interest (SSSI).

Little information exists about the Heathland until the time of the Second World War although there are some remnants of what appear to be practice trenches which may date from World War One, so it can probably be assumed that things continued much as they had done for centuries.

With the advent of war then, the Heathland, including Hothfield Hospital (the former workhouse), which is at the north-west corner was requisitioned as an army training ground and Nissen huts were erected. The existence of a wide trench that is still known as the “tank trap” (probably used to camouflage Bren Gun carriers) is about the only visible reminder of those times.

[Lightly edited and extracted from "Hothfield in the 20th Century" publication, see the History link.]